This may seem, on first viewing or by someone just looking for a well-made spy action-adventure, to be a totally inept rush-job. It was, sadly enough, Franco's last collaboration with his legendary discovery, Soledad Miranda. She would die in a car accident shortly after the completion of this supposed Edgar Wallace adaptation. The plot is basically generic Eurospy cliches strung end to end with the main interesting aspects being Miranda's participation and the director's stylistic solutions to make the then-flailing Edgar Wallace franchise compete with numerous Bond imitations.

British Agent Jane Morgan (Miranda) joins forces with a Scotland Yard investigator (Fred Williams) to locate a stolen mineral which has the capacity to transform base metal into gold. The downside is that it emits rays which turn all those who come into contact with it into barbecued zombies. After a trip to the tropical country of Akasava, where the stone was discovered, the agents discover two eminent physicians (well played by Franco regulars Paul Muller and Horst Tappert) have secured the element and are planning to sell it to a corrupt philanthropist. The men are murdered by a counter-agent (Howard Vernon), who is ultimately blown up along with the stone in a plane crash while attempting to flee the country.

Miranda's participation in this enterprise is highly erratic — she pops in and out of the story and her main role is to provide a romantic interest for the hero, indifferently played by the soporific Fred Williams, a handsome, dull actor who spends most of the film limping around in a debilitating leg cast. She doesn't really get a chance to project the obsessed sensuality which burned up the screen in her stunning turns in VAMPYROS LESBOS and EUGENIE DE SADE (both 1970). She does get to perform some abstract strip teases during which she barely moves and doesn't even remove any clothing. No strip and a lot of tease. Cubist eroticism, Jess Franco, style. She is simply somewhat wasted in a role any actress could have done, and whenever offstage she never turns on that mysterious aura of narcotic eroticism which surrounds those indelible performances. Howard Vernon and Franco himself appear in small roles as agents and lighten up the proceedings with some humorous asides. 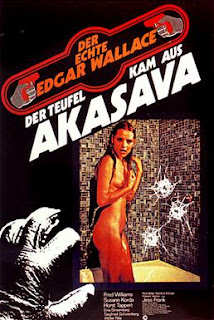 What saved the film for me were the whirlwind vocal and brass score by Manfred Hubler and Siegfried Schwab (available on CD) and Franco's frenetic camera style and pacing. The director really goes over the top with the zoom lens here (as many critics have complained), moving in and out of the action (or non-action) or suddenly zooming up to the top of palm trees and back down again for no particular reason. These rather desperate directorial moves become kind of amusing to watch for the sheer unpredictability of what Franco is going to focus (or un-focus) on next. The wild camera work is accentuated by the fast paced editing (unusual in a Franco film from this period) and heady music. Franco obviously knew he was involved in a lost cause and at least produced film with a few of his personal touches. It's a Eurospy quickie which his longtime fans can laugh at while regretting the fate of the doomed Miranda.

There is also an English language dub of this film. Would anyone know who dubbed Soledad Miranda in this version? Please answer in comments, thanks.