THE GIRL FROM RIO: Jess Franco's 1969 Eurospy-style thriller, filmed in Rio de Janeiro, Brazil, features Richard Wyler as an agent sent by a banker to rescue his daughter from a cult of political terrorists led by Sumuru, played by former Bond Girl Shirley Eaton (GOLDFINGER). It's playing for free on Tubi. There's also the Harry Alan Towers produced THE MILLION EYES OF SUMURU from 1967, also starring Ms. Easton in the title role and featuring Maria Rohm (also in THE GIRL FROM RIO), George Nader as an American secret agent, and Klaus Kinski. That one is directed by Lindsay Shonteff and is on the Blue Underground Blu-ray along with THE GIRL FROM RIO. A more action packed film than GIRL, it was filmed on location Hong Kong. 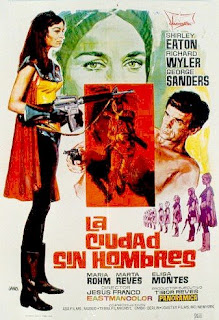 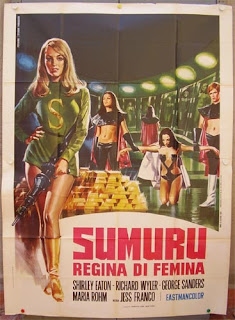 I'd actually recommend the German alternate cut which contains an armored car robbery not in any other version. This is one of the most well engineered action scenes in a Jess Franco film. It also has a different music score. The original score by Daniel White is a delight for fans of bossa  nova. Sumuru (Shirley Eaton) and her #2 (Beni Cardoso) in THE GIRL FROM RIO/FUTURE WOMEN/RIO 70.

Jess Franco would do several follow ups, including the 1987 ESCLAVAS DEL CRIMEN, starring Lina Romay as a Sumuru-like like leader of a group of lethal women who kidnap and kill on her orders. That one features a very stylized aesthetic, using diffusion filters and other optical effects to give the overall visual impression of a comic book.

An even more outre follow up was Franco's 1977 BLUE RITA/DAS FRAUENHAUS, filmed in Paris and featuring Pamela Stanford as a leader of a criminal organization of female seductresses and spies. The visual style of that one, co produced by Erwin Dietrich and Robert De Nesle, deploys a lot of colorful costumes, color gel lighting, smoke, mirrors and eye catching filter effects. The women are a bisexual, sadistic, and exhibitionist lot who make a lot of trouble. 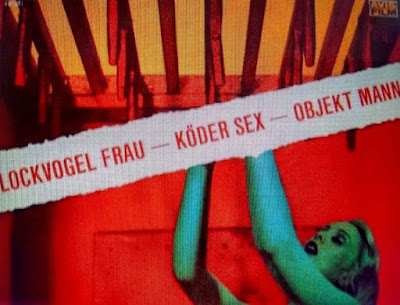